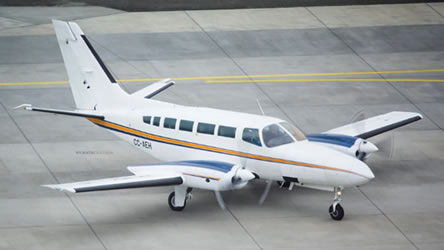 Cessna’s largest twin-piston engined aircraft at its time, the Cessna 404 Titan was developed in the early 1970s and introduced in 1976. The focus of developing the new model was to utilise it for passenger and cargo transfers, therefor the company offered two variations of the model from the beginning. These were the 404 Titan Ambassador passenger aircraft, and the 404 Titan Courier intended for both passangers or cargo. The Cessna 404 Titan is powered by twin Continental GTSIO-520-M turbocharged piston engines.

Red Box is pleased to offer a great range of ground power equipment for this aircraft, including tugs, ground power units, start power units, aviation tools, and more, which are perfectly suited to the requirements of the Cessna 404 Titan aircraft.

We highly recommend both the RBFLT 52 electric tug and the 709 gas tug, which enables users to quickly and safely maneuver the aircraft as required, whilst we offer a great range of 12V start power units, including the hugely popular RB25A unit.

View more of our recommended ground power equipment for the Cessna 404 Titan below.