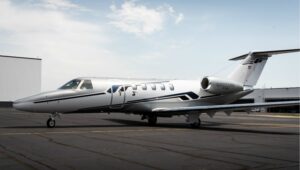 The Cessna CitationJet (CJ, Model 525) series are light, twin-engine business jets, developed by Cessna as a part of the Citation family. The initial Cessna CitationJet, the Model 525 was launched in 1989 at the NBAA in Atlanta, with its first flight taking place in 1991. The most significant aspects of the design consisted of a pressurized cabin, supercitical wings and a T-tail. The powerplants utilised was two Williams FJ44s, featuring EFIS avionics. The latest addition to the family, the Model 525C was introduced at the NBAA of 2006. A predominant upgrade was the new wing design, inherited from the Citation Sovereign. The CJ4 utilised Williams FJ44-A4 powerplants, achieving better performance than previous models. The CJ4’s cabin was further extended, facilitating for the total 9 passenger seats, which were available in a number of configurations, and remained overall of a luxurious quality.

Red Box is pleased to offer a great range of ground power and support equipment for this aircraft, including tugs, ground power units, start power units, aviation tools, and more, which are perfectly suited to the requirements of the Cessna Citation CJ4 aircraft.

This includes the popular RBI9300T avionics measurement supply kit complete with 68 BAHCO tools, the 747C aviation tug, the RBSC225 continuous power unit, which is ideal for diagnostic work, pre-flight checks or for continuous powering of equipment during operations, without draining the onboard aircraft batteries and the Twin RB75A start power unit for starting the aircraft, helping to avoid hot starts. We also offer a combination of start and continuous power in one unit for the Cessna CitationJet CJ4 aircraft in our TC3000 range.

View all recommended ground power equipment, tools and Tugs for the Cessna Citation CJ4 aircraft below.