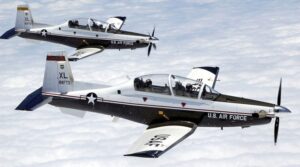 The Beechcraft T-6 Texan II is a single-engine tandem-seat trainer aircraft, built by Raytheon Aircraft Company (later Hawker Beechcraft). The design of the T-6 was based on the predecesssing Pilatus PC-9, with minor modifications of the latter’s airframe creating the prototype for the T-6 Texan II in 1962. The design was further developed, and finalised as a low-wing cantilever monoplane configuration, utilising a Pratt & Whitney Canada PT6A engine, powering a four-balde propeller. As a pilot trainer aircraft, the T-6 Texan II was fitted with an ejection seat as well. The T-6A models were used by the U.S. military, as well as the Greek Hellenic Air Force. Later variants included armed T-6s, carrying light ordnance.

Red Box is pleased to offer a great range of ground power and support equipment for this aircraft, including tugs, ground power units, start power units, aviation tools, and more, which are perfectly suited to the requirements of the Hawker Beechcraft T-6A Texan II aircraft.

This includes the popular RBI9400T mechanic hand trolley case complete with 161 BAHCO tools, the 709 gas-powered tug, the RBFLT 52 electric tug, the RBPS50 continuous power unit, which is ideal for diagnostic work, pre-flight checks or for continuous powering of equipment during operations, without draining the onboard aircraft batteries and the RB50A for starting the aircraft, helping to avoid hot starts. We also offer a combination of start and continuous power in one unit for the Hawker Beechcraft T-6A Texan II aircrafts in our TC3000 range.