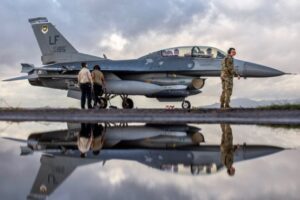 The General Dynamics F-16 (Fighting Falcon) is a single-engine supersonic multirole fighter. The F-16 was developed by General Dynamics for a requirement announced by the United States Air Force, for an air superiority fighter, with the F-16’s prototype subsequently winning the competition following several re-designs and adaptations. The finalised design encorporated a frameless bubble shaped canopy, in order to increase visibility, while also being installed with an ejection seat that was tilted 30 degrees to reduce g-force on the operating pilots. The F-16’s agility was achieved through the relaxed static stability/fly-by-wire flight control system, utilised for the first instance at the time. With over 4,600 F-16 (and variants of) produced, the aircraft has now evolved into a multi-role aircraft, with most aircrafts for military roles being purchased from outside the United States.

Red Box is pleased to offer a great range of ground power and support equipment for this aircraft, including tugs, ground power units, start power units, aviation tools, and more, which are perfectly suited to the requirements of the Lockheed (General Dynamics) F-16 aircraft.

This includes the popular RBI9400T mechanic hand trolley case complete with 161 BAHCO tools, and the 757 tug. We also offer a combination of start and continuous power in one unit for the Lockheed (General Dynamics) F-16 aircraft in our TC3000 range.