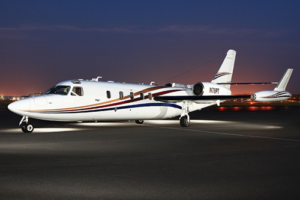 The IAI Westwind is a medium-sized business jet, initially produced by Aero Commander, under the designation 1121 Jet Commander. The IAI Westwind designation came about when Israel Aircraft Industries (IAI) purchased the program in 1968, making minor amendments to the original design. The first aircraft created was the 1123 Westwind with an extended fuselage, added double-slotted flaps, a revamped horizontal stabilizer and utilising General Electric CJ610 engines. The next variant was the 1124 Westwind, with enhanced performance as a result of uprated engines powering the aircraft, and advanced avionics systems. The Westwind II replaced the predecessor in production from 1980, with updated elements, such as a new wing centre-section.

Red Box is pleased to offer a great range of ground power and support equipment for this aircraft, including tugs, ground power units, start power units, aviation tools, and more, which are perfectly suited to the requirements of the IAI Westwind II aircraft.

This includes the popular RBI9400T mechanic hand trolley case complete with 161 BAHCO tools, the 747C gas-powered tug, the RBSC150 continuous power unit, which is ideal for diagnostic work, pre-flight checks or for continuous powering of equipment during operations, without draining the onboard aircraft batteries and the RB75A for starting the aircraft, helping to avoid hot starts. We also offer a combination of start and continuous power in one unit for the IAI Westwind II aircraft in our TC3000 range.

View all recommended ground power equipment, tools and Tugs for the IAI Westwind II aircraft below.