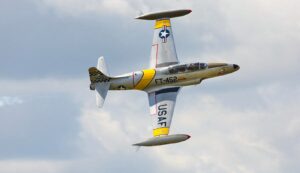 The Lockheed T-33 Shooting Star (T-Bird) is a subsonic jet trainer, manufactured by Lockheed Corporation, introduced in 1948. The T-33 was originally designed for military use, under the designation TP-80C, which was then further developed into the T-33A two-seat trainer jet. The aircraft utilised a single Allison J33-A-35 engine, accomodated in the extended fuselage. Most of the initial models were purchased by the U.S. Navy, and used for flight training and smaller roles.

Red Box is pleased to offer a great range of ground power equipment for this aircraft, including tugs, ground power units, start power units, aviation tools, and more, which are perfectly suited to the requirements of Lockheed T-33.

View all recommended ground power equipment, tools and Tugs for the Lockheed T-33 aircraft below.