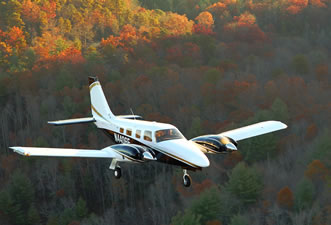 The Piper PA-34-200 Seneca is a twin-engined light aircraft, mainly used as a personal or business aircraft. The model is manufactured in the United States by Piper Aircraft, since 1971 to this day. To create the protoype for the PA-34-200 Seneca, Piper used a modified single-engine Cherokee Six, retainin the nose engine, but affixing wing-mounted engines to the aircraft. The new PA-34-200 Seneca got certified in 1971, and introduced later on that year. As per the finalised design, the PA-34-200 Seneca is powered by counter-rotating Lycoming IO-360-C1E6 engines, utilising a Lycoming LIO-360-C1E6 engine on the right hand side. The benefit of counter-rotating is additional control over the aircraft, even when one engine has to be sut down or fails.

Red Box is pleased to offer a great range of ground power equipment for this aircraft, including tugs, ground power units, start power units, aviation tools, and more, which are perfectly suited to the requirements of the Piper PA-34-200 Seneca aircrafts.

This includes the popular RBI9400T mechanic hand trolley case complete with 161 BAHCO tools, the 709 tug, and the RBPS25 continuous power unit, which is ideal for diagnostic work, pre flight checks or for continuous powering of equipment during operations, without draining the onboard aircraft batteries. We also offer a combination of start and continuous power in one unit for the Piper PA-34-200 Seneca aircrafts in our TC3000 range.