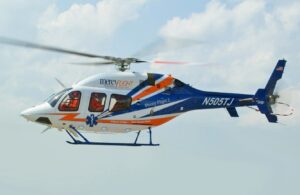 The Bell 429, also known as GlobalRanger, is a light, twin-engine helicopter introduced in 2009, and jointly developed by Bell Helicopter and Korea Aerospace Industries. The initial design for the new helicopter came about due to a requirement for a medical emergency aircraft, and was derived from the previous model Bell 427. The aforementioned was originally intended for this market, however it had inadequate cabin capacity to accomodate for patient care needs. The prototype of the Bell 429 first flown in 2007, and the aircraft was announced in 2009. The finalised design featured rear clamshell doors to facilitate for patient and equipment loading, optional retractable landing gear, and was capable of operating more quietly as a result of advanced rotor utilisation.

Red Box is pleased to offer a great range of ground power and support equipment for this aircraft, including tugs, ground power units, start power units, aviation tools, and more, which are perfectly suited to the requirements of the Bell 429 aircraft.

View all recommended ground power equipment, tools and Tugs for the Bell 429 aircraft below.