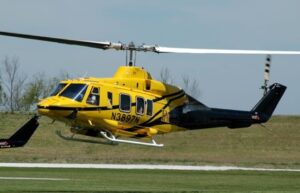 The Bell 214ST is a twin-engine, medium-lift helicopter introduced in 1982. The 214ST was derived from the popular UH-1 Huey series, and using a 214 as the prototype aircraft. The 214ST was initially intended as a military aircraft, which was later developed into a commercial helicopter. The construction comprised of a stretched fuselage when compared to the 214, fibreglass rotorblades, a cockpit and cabin door located separately on the fuselage, and utilising twin General Electric CT7-2A engines. The 214ST was the largest helicopter manufactured by Bell at the time, and became a success due to its excellent performance.

Red Box is pleased to offer a great range of ground power and support equipment for this aircraft, including tugs, ground power units, start power units, aviation tools, and more, which are perfectly suited to the requirements of the Bell 214ST aircraft.

This includes the RBSC150 continuous power unit and the Twin RB75A for starting the aircraft and helping to avoid hot starts.

View all recommended ground power equipment, tools and Tugs for the Bell 214ST aircraft below.