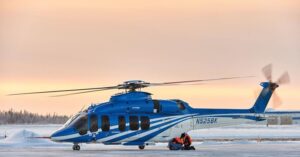 The Bell 525 Relentless is a medium-lift utility helicopter, under development by Bell Textron at present, initially announced in 2012 at the Heli-Expo held in Dallas. The design of the 525 comprises of a 20-seat cabin layout, and utilising the innovative fly-by-wire flight controls. The construction is predicted to be built of composite material and metal, and fitted with two General Electric CT7-2F1 engines powering five-blade propellers. Certifications for the aircraft were expected for 2017, however due to a devastating crash of a prototype this was delayed. At this time, the aircraft is offered to both the commercial and military market.

Red Box is pleased to offer a great range of ground power and support equipment for this aircraft, including tugs, ground power units, start power units, aviation tools, and more, which are perfectly suited to the requirements of the Bell 525 aircraft.

This includes the popular RBI9650T Avionics tool kit complete with 266 BAHCO tools, the 747C aviation tug, and the RB75A start power unit for starting the helicopter and helping to avoid hot starts . We also offer a combination of start and continuous power in one unit for the Bell 525 aircraft in our TC3000 range.

View all recommended ground power equipment, tools and Tugs for the Bell 525 aircraft below.