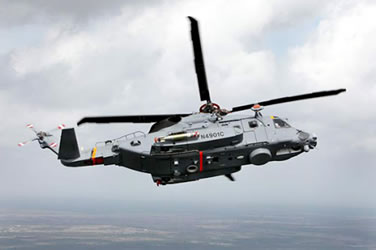 The Sikorsky CH-148 Cyclone is a twin-engine, multi-role shipboard helicopter, developed and manufactured by the Sikorsky Aircraft Corporation, as a proposal for a requirement revealed by the Canadian Armed Forces, derived from the previously designed S-92, which came about following the oil crisis in 1973, for which the S-92 was manufactured with the capacity to travel further off-shore, providing an excellent base for a shipboard military helicopter. New aspects were encorporated in the design of the CH-148, such as a modified main gearbox, flaw tolerance and bird strike capability. In order to fullfill the ASW was installed with anti-missile equipment and search devices for submarine location. The CH-148 had subsequently replaced the CH-124 Sea King in military service.

Red Box is pleased to offer a great range of ground power equipment for this aircraft, including tugs, ground power units, start power units, aviation tools, and more, which are perfectly suited to the requirements of Sikorsky CH-148 Cyclone aircraft.

This includes the popular RBI9400T mechanic hand trolley case complete with 161 BAHCO tools, and the 747C and RBFLT180 tugs.

View all recommended ground power equipment, tools and Tugs for the Sikorsky CH-148 Cyclone aircraft below.