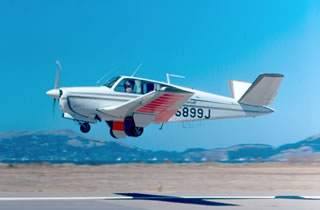 Manufactured since 1947, the Beechcraft Bonanza has been in continuous production with over 17,000 various Bonanza aircrafts being built throughout the years. The Beechcraft Bonanza line stands out for being the longest produced aircraft line in history, with models being manufactured to this day. The Beechcraft 35 Bonanza has been produced until 1982, with the main purpose being general aviation, however the model was based on the characteristics of the fighters developed during World War II. The aircraft features a single, six-cylinder engine, retractable landing gear and its distinctive V-tail.

Red Box is pleased to offer a great range of ground power equipment for this aircraft, including tugs, ground power units, start power units, aviation tools, and more, which are perfectly suited to the requirements of the Beechcraft 35 Bonanza aircraft.

The RB25A 1200A 12V start power unit is highly recommended, whilst the 701D tug is perfect for moving the aircraft with minimal fuss. If it’s tools you need, how about our hugely popular RBI9650T Avionics Toolkit, which contains a 266 BAHCO tools allowing you to complete any maintenance task on the Bonanza.