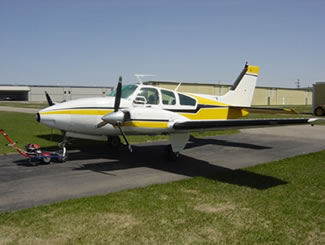 The Baron line started production in 1961, and later introduced the C55, D55 and E55, between 1966-1970. The purpose of developing the new models were to improve on several aspects of design, allowing for more space for baggage and advanced performance. Starting with the Beechcraft C55, the developers worked on re-designing the previously problematic engine air intake box and replacing the belt driven alternators to a gear driven version. The Beechcraft D55 incorporated a speed-slope windshield and changed to three blade propellers. The latest addition to the line, the Beechcraft E55 involves new interior design, wing-tip lights, flushing rotating beacon and an additional 172 US gallon interconnected tank from 1976.

Red Box is pleased to offer a great range of ground power equipment for this aircraft, including tugs, ground power units, start power units, aviation tools, and more, which are perfectly suited to the requirements of the Beechcraft 55C/D/E Baron aircraft.

The 717 Tug is ideal for moving the aircraft quickly and safely in tightly stacked hangars or staging on the ramp, whilst the RB25A start power unit will have you up in the air in no time at all.

View all our recommended ground power equipment for the Beechcraft 55C/D/E Baron aircraft below.