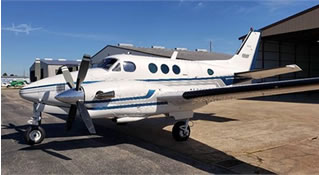 The Beechcraft King Air is a line of twin-turboprop aircrafts, partly consisting of several variants of the original King Air B90. Production of the Beechcraft King Air E90 began in 1972, featuring the increased wingspan over earlier models, just like its counterpart the C90, and had achieved a MTOW increased to 9,650 lbs. The aircraft uses aspects from previous models, such as the fuel system and instrument panel from the Beechcraft A100. A more powerful engine has been installed to improve performance, namely the Pratt & Whitney PT6A-28.

Red Box is pleased to offer a great range of ground power equipment for this aircraft, including tugs, ground power units, start power units, aviation tools, and more, which are perfectly suited to the requirements of the Beechcraft King Air E90 aircraft.

We highly recommend the RBI9650T Avionics Toolkit which includes 266 BAHCO hand tools and shadow foam. This will allow you to carry out all maintenance tasks on the aircraft quickly and efficiently, whilst the tools have a lifetime guarantee thanks to being manufacturer using the highest quality steel.

For continuous power, we recommend the RBSC100, which is extremely easy to use and contains a range of built in safety features. This switchable unit will produce a steady 14.4 or 28.8 Volts up to the fully rated output current with power factor correction.

View all advised ground power equipment for the Beechcraft King Air E90 below.