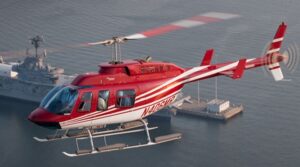 The Bell 206 is a family of single- and twin-engined utility helicopters, developed and manufactured by Bell Helicopter. Bell originally came up with the helicopter’s design as a proposal for a U.S. Army requirement, calling for a light observation helicopter. As the design did not win the competition, Bell opted for marketing the aircraft as a commercial utility helicopter, under the 206A JetRanger designation. The new aircraft featured a larger and more elegant fuselage design, to accmmodate for a roomier cabin for both passengers and baggage/cargo. An interesting fact is that the JetRanger was subsequently selected by the U.S. Army for their observation and reconaissance helicopter, which was designated OH-58 Kiowa. Bell created the LongRanger line, to which the latest single engine addition is the Bell 206L-4. The LongRangers were optimised for high-altitude flying, with better endurance in regards to hot weather and heat produced from the engine. After a successful run, productions of the model were ceased in 2017.

Red Box is pleased to offer a great range of ground power and support equipment for this aircraft, including tugs, ground power units, start power units, aviation tools, and more, which are perfectly suited to the requirements of the Bell 206L-4 aircraft.

This includes the popular the RB50A start power unit and the RBPS50 continuous power unit, which is ideal for diagnostic work, pre-flight checks or for continuous powering of equipment during operations, without draining the onboard aircraft batteries. We also offer a combination of start and continuous power in one unit for the Bell 206L-4 aircraft in our TC3000 range.

View all recommended ground power equipment, tools and Tugs for the Bell 206L-4 aircraft below.