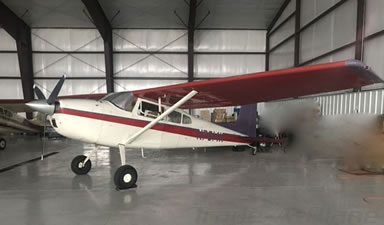 Produced between 1953 and 1981, the Cessna 180 is a 4-6 seat, general aviation airplane. Variants of the aircraft were also produced – Cessna 182 and Cessna 185 – with the airplane, also known as the Skywagon, providing a powerful performance.

Red Box Aviation is pleased to offer a wide range of ground power equipment for the Cessna 180, including start power units, tugs, and continuous power units, with our GPU range receiving plaudits in both the civilian and military markets, which has seen Red Box being chosen on numerous occasions to provide bespoke power solutions to the UK military and associated equipment providers.

If you are seeking a start power unit for the Cessna 180, we would highly recommend the RB25A unit, which is a switchable unit that can be changed between 12V and 24V settings, and provides exceptional power to weight ratio. For aircraft tugs, you cannot go wrong with the 709 tug. This popular aviation tug can move aircraft up to 9,500 lbs and makes it easy for one person to manoeuvre aircraft quickly and safely in tightly stacked hangars or staging on the ramp.

Contact Red Box Aviation if you seek further ground power equipment for the Cessna 180 and we will be happy to help.