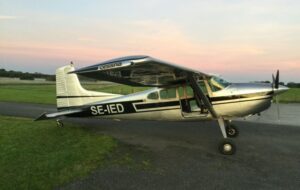 The Cessna 185 Skywagon is a light, single-engined general aviation aircraft built by Cessna, with productions beginning in 1961. Cessna created the aircraft by re-designing the model 180, with a strengthened fuselage and installing a vertical fin on the Cessna 185. Initially powered by a Continental Motors IO-470-F engine, the aircraft received the upgraded Continental IO-520-D powerplant in 1966. The Skywagon was available with a variety of optional add-ons, such as floats or skis, spray booms and a cargo pod fitted sub-fuselage for additional payload.

Red Box is pleased to offer a great range of ground power and support equipment for this aircraft, including tugs, ground power units, start power units, aviation tools, and more, which are perfectly suited to the requirements of the Cessna 185 Skywagon aircraft.

This includes the popular RBI94300T avionics measurement supply kit complete with 68 BAHCO tools, the 701E electric tug, the RBPS25 continuous power unit, which is ideal for diagnostic work, pre-flight checks or for continuous powering of equipment during operations, without draining the onboard aircraft batteries and the RB25A for starting the aircraft, helping to avoid hot starts.

We also offer a combination of start and continuous power in one unit for the Cessna 185 Skywagon aircraft in our TC3000 range.

View all recommended ground power equipment, tools and Tugs for the Cessna 185 Skywagon aircraft below.