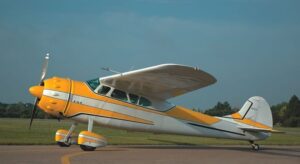 The Cessna 195 Businessliner is a family of light, single-engine general aviation aircrafts, produced by Cessna Aircraft Company. The design from the Cessna 195 was derived from the predecessing Cessna 165, maintaining a similar aiframe with some changes and improvements. The Cessna 195 had a relatively large fuselage, in order to allow enough space for the Jacobs R-755 radial engine. The construction consists of aluminium, for the first time in the history of Cessna aircrafts. Productions were halted in 1954, by then over a thousand models were sold.

Red Box is pleased to offer a great range of ground power and support equipment for this aircraft, including tugs, ground power units, start power units, aviation tools, and more, which are perfectly suited to the requirements of the Cessna 195 aircraft.

This includes the popular RB25A start power unit, the 701E electric moving tug, and the RBPS25 continuous power unit, which is perfect for diagnostic work, pre-flight checks or for continuous powering of equipment during operations without draining the onboard aircraft batteries. We also offer a combination of start and continuous power in one unit for the aircraft in our TC3000 range.

View all recommended ground power equipment, tools and Tugs for the Cessna 195 aircraft below.