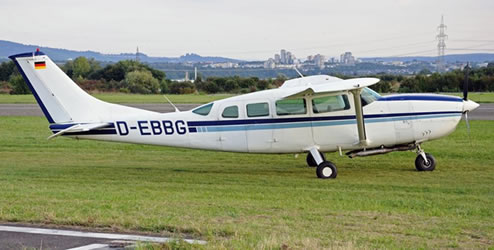 The Cessna 207 had been designed based on the previous model in the line, the Cessna 206, and was introduced in 1969. The aircraft utilised a Continental IO-520-F engine, later offering a turbocharged variant, using a TSIO-520-G with 300 HP output. The Cessna 207 was developed and designed to accommodate for additional seats, accomplished by extending the fuselage in the front, aft area and rear. The Cessna 207 had become popular as an air taxi, mainly used for short distances due to its passenger capacity.

Red Box is pleased to offer a great range of ground power equipment for this aircraft, including tugs, ground power units, start power units, aviation tools, and more, which are perfectly suited to the requirements of the Cessna 207 Skywagon aircraft.

This includes the hugely popular 701E electric tug, which is capable of quickly and safely moving aircraft up to 2,000 kg / 4,500 lbs, as well as being fully collapsible for compact stowing.

To provide power, we highly recommend the RB25A start power unit. This unit is ideal for a wide range of aircraft and provides 1200A at 12v.

View all recommend ground power equipment for the Cessna 207 Skywagon aircraft below.