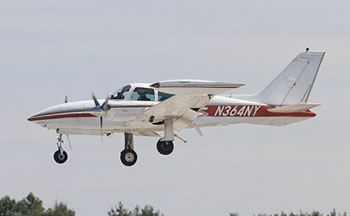 The Cessna 310 is a twin-engine, low-wing monoplane. The model was the first twin engine aircraft that Cessna had manufactured, with productions commencing in 1954 all throughout to 1980. The Cessna 310 has been developed with a modern, more sleek design, as well as an innovative aspect such as the instalment of augmenter tubes for the engine exhaust thrust. The first models in the line were equipped with tip tank used to store all fuel. The model was later upgraded with Continental IO-470-D engines, creating the Cessna 310C.

Red Box is pleased to offer a great range of ground power equipment for this aircraft, including tugs, ground power units, start power units, aviation tools, and more, which are perfectly suited to the requirements of the Cessna 310 aircraft.

View all recommended ground power equipment for the Cessna 310 aircraft below.