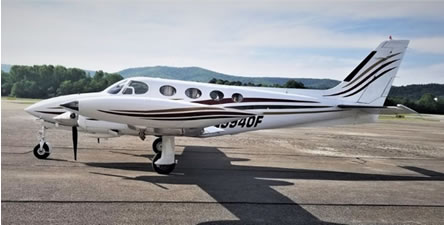 Following the success of the Cessna 310, the twin piston-engine Cessna 340 was developed with the main goal to create a cabin-class business aircraft. The aircraft was designed in 1969, featuring an airstair door and four passenger seats, with one of the most spacious cabins found in light twin aircrafts at the time. The initial models were powered by Continental TSIO-250-K engines, to be later upgraded to a Continental TSIO-520-NB. The variants of the Cessna 340 equipped with the stronger engines had been named Cessna 340A.

Red Box Aviation is pleased to offer a great range of ground power equipment for this aircraft, including tugs, ground power units, start power units, aviation tools, and more, which are perfectly suited to the requirements of the Cessna 340 aircraft.

From continuous power, we strongly recommend the RBPS25 continuous power unit which provides 25A at 14/28V DC. If it’s maintenance tools you require, look no further than the hugely popular RBT305T Cessna and Piper General Maintenance and Avionics kit, which includes 350 BAHCO tools.

View all recommended ground power equipment for the Cessna 340 aircraft below.