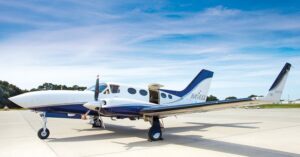 The Cessna 414 is a pressurized, twin-engine light transport aircraft, manufactured by Cessna. The aircraft was derived from previous models, using the fuselage of the Cessna 421, and the wing construction from the Cessna 401. Powered by Continental TSIO-520-J engines, the 414 had a tricycle landing gear and conventional tail. The intension behind developing the aircraft was to provide a pressurized option of twin engine aircrafts, to owners of non-pressurized models. The Cessna 414 was available in several seating configurations, and avionics systems, later also offering the improved variant; the 414A Chancellor. The Chancellor was introduced in 1978, with some significant changes compared to the predecessor. It was installed with upgraded, longer span wet wings, a larger nose for added baggage or cargo, and a narrower vertical tail. The Chancellor was powered by TSIO-520-N engines.

Red Box is pleased to offer a great range of ground power and support equipment for this aircraft, including tugs, ground power units, start power units, aviation tools, and more, which are perfectly suited to the requirements of the Cessna 414A Chancellor aircraft.

This includes the popular 709 aviation tug, the RBPS25 continuous power unit, which is ideal for diagnostic work, pre-flight checks or for continuous powering of equipment during operations, without draining the onboard aircraft batteries, and the RB25A start power unit for starting the aircraft, helping to avoid hot starts.

We also offer a combination of start and continuous power in one unit for the aircraft in our TC3000 range.

View all recommended ground power equipment, tools and Tugs for the Cessna 414A Chancellor aircraft below.