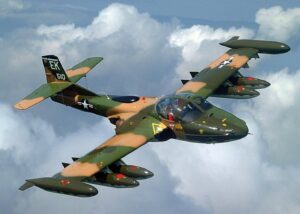 The Cessna A-37 Dragonfly is a light attack aircraft developed from the T-37 Tweet basic trainer. United States Air Force found the T-37 promising but wanted an improved version of the aircraft that could carry a larger payload, have greater endurance and better short-field performance. This meant that the aircraft would require more powerful engines and would result in an increase of weight as well. Cessna added stronger wings which also had storage space, larger wingtip fuel tanks, better avionics for communications and navigation and a more robust landing gear.

Red Box is pleased to offer a great range of ground power equipment for this aircraft, including tugs, ground power units, start power units, aviation tools, and more, which are perfectly suited to the requirements of the Cessna A-37 Dragonfly aircrafts.

This includes the popular RBT305T Cessna and Piper General Maintenance and Avionics kit, complete with 350 tools, the 717 tug, and the RBSC100 100A continuous power unit, which is ideal for diagnostic work, pre-flight checks or for continuous powering of equipment during operations, without draining the onboard aircraft batteries. We also offer a combination of start and continuous power in one unit for the Cessna A-37 Dragonfly in our TC3000 range.

View all recommended ground power equipment, tools and Tugs for the Cessna A-37 Dragonfly aircrafts below.