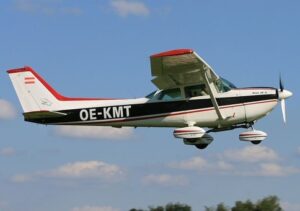 The Cessna R172 Skyhawk is a four-seater, single-engine, high and fixed-wing aircraft, which has a tricycle undercarriage. The aircraft remains in production to this day and has multiple variants over the years. Cessna was influenced by the Reims Rocket, which led to production of the R172K Hawk XP, which had a fuel-injected, two-bladed, constant-speed propeller.

Red Box is pleased to offer a great range of ground power equipment for this aircraft, including tugs, ground power units, start power units, aviation tools, and more, which are perfectly suited to the requirements of the Cessna R172 Hawk XP aircrafts.

This includes the popular RBI9650T mechanic hand trolley case complete with 266 BAHCO tools, the 701E electric moving tug, and the RBPS25 continuous power unit, which is ideal for diagnostic work, pre flight checks or for continuous powering of equipment during operations, without draining the onboard aircraft batteries. We also offer a combination of start and continuous power in one unit for the Cessna R172 Hawk XP aircrafts in our TC3000 range.