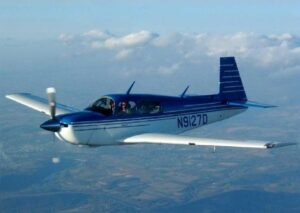 The Mooney M20 is a piston-powered general aviation aircraft, with several later variants in the M20 family, and one of the last wood-winged Mooney aircrafts. In early 1953, it became evident that the predeccessing M18 Mite had came to the end of its production, hence developments for the new M20 model were expedited as by 1953, Al Mooney had been long devising a design for a four-seater aircraft. At first, the company had failed to make any profit on selling the aircrafts, due to start-u[p costs. However in 1959, the new Mooney M20A – being the only model offered from the series – became a prominent and noteworthy aircraft in its league, due to its speed and efficiency.

Red Box is pleased to offer a great range of ground power equipment for this aircraft, including tugs, ground power units, start power units, aviation tools, and more, which are perfectly suited to the requirements of the Mooney M20 aircrafts.

This includes the popular RBI9400T mechanic hand trolley case complete with 161 BAHCO tools, the 701D tug, and the RBPS50 continuous power unit, which is ideal for diagnostic work, pre flight checks or for continuous powering of equipment during operations, without draining the onboard aircraft batteries. We also offer a combination of start and continuous power in one unit for the Mooney M20 aircrafts in our TC3000 range.

View all recommended ground power equipment, tools and Tugs for the Mooney M20 aircrafts below.