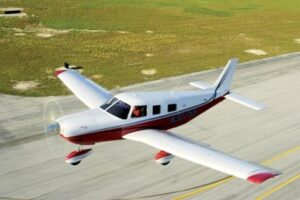 The Piper PA-32 is a series of single-engine, light aircraft manufactured by Piper Aircraft. The main use of the aircrafts were as private transportation or air taxi services, with a prominent use in medical evacuation as well. The first model in the series, the PA-32 was introduced in 1965 as the Cherokee Six. The new design of the Cherokee Six included baggage compartment added in the nose of the aircraft, as well as larger size double cargo doors. This made loading of miscellaneous cargo, and passangers’s access a lot more convenient than the predecessing designs. Due to the the new addition to related legislations, the General Aviation Revitalization Act of 1994 Piper has been bound to reintroduce a fixed-gear alternative to the aircraft, starting from 1995. A new, fixed-gear alternative of the Cherokee Six was introduced in 2003, named the Piper 6X, however the aircraft did not meet the expectations, and was ceased from production in only 4 years.

Red Box is pleased to offer a great range of ground power equipment for this aircraft, including tugs, ground power units, start power units, aviation tools, and more, which are perfectly suited to the requirements of the Piper 6X aircrafts.

This includes the popular RBI9400T mechanic hand trolley case complete with 161 BAHCO tools, the 701E tug, and the RBPS25 continuous power unit, which is ideal for diagnostic work, pre flight checks or for continuous powering of equipment during operations, without draining the onboard aircraft batteries. We also offer a combination of start and continuous power in one unit for the Piper 6X aircrafts in our TC3000 range.

View all recommended ground power equipment, tools and Tugs for the Piper 6X aircrafts below.