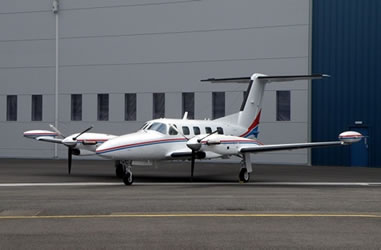 The Piper PA-42 Cheyenne is a turboprop aircraft, introduced in 1979, built by Piper Aircraft. The aim of the new model was to create a direct competitor for the Beechcraft King Air series. Developments were commenced based on the predecessing PA-31T Cheyennes’ design, and the new aircraft was designated the name Piper Cheyenne III. Around the same time, they aspired to produce a light business jet to compete with the Cessna Citation I, and had decided to upgrade the engines to twin Honeywell TPE331-14s, achieveing 1,000 hp. The P-42-1000 (a.k.a. Cheyenne IV) had been introduced to the public in 1984 . The aircraft had been re-named several times, starting with the name Cheyenne 400, due to reaching its top speed over 400 mph. Later it became the 400LS, referring to Lear Siegler, the owner of Piper Aircraft at the time. An interesting fact is that the PA-42 Cheyenne 400LS Cheyenne 400LS is the largest aircraft manufactured by Piper to this day.

Red Box is pleased to offer a great range of ground power equipment for this aircraft, including tugs, ground power units, start power units, aviation tools, and more, which are perfectly suited to the requirements of the Piper PA-42 Cheyenne 400LS aircrafts.

This includes the popular RBI9400T mechanic hand trolley case complete with 161 BAHCO tools, the 717 tug, and the RBPS50 continuous power unit, which is ideal for diagnostic work, pre flight checks or for continuous powering of equipment during operations, without draining the onboard aircraft batteries. We also offer a combination of start and continuous power in one unit for the Piper PA-42 Cheyenne 400LS aircrafts in our TC3000 range.

View all recommended ground power equipment, tools and tugs for the Piper PA-42 Cheyenne aircraft below.