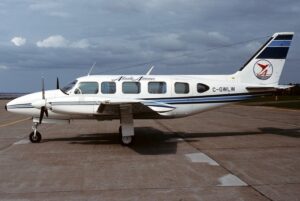 The Piper PA-31 Navajo, introduced in 1967 is a family of twin-engined civil utility aircrafts, with the target market in corporate and general aviation. The initial PA-31 was designed upon the request of Company founder William T. Piper in 1962, and was partially based on the Twin Comanche, featuring two Lycoming TIO-540-A turbocharged engines. Two extra cabin windows were added, allowed by the extended fuselage and moving the engines further forward. Inspired by the success of the PA-31, Piper had started producing further variants, one of which was the PA-31-350 Navajo Chieftain introduced in 1972. The Chieftain was an even more powerful model, using two counter-rotating Lycoming TIO-540-J2BD (-and LTIO-540) engines, this was a significant modification to help eliminate critical engine issues. The aircraft was an elongated version of its predecessing Navajo B, allowing for a total of 10 passanger seats.

Red Box is pleased to offer a great range of ground power equipment for this aircraft, including tugs, ground power units, start power units, aviation tools, and more, which are perfectly suited to the requirements of the Piper PA-31-500 Chieftain aircrafts.

This includes the popular RBI9400T mechanic hand trolley case complete with 161 BAHCO tools, the 709 aircraft tug, and the RBPS50 continuous power unit, which is ideal for diagnostic work, pre flight checks or for continuous powering of equipment during operations, without draining the onboard aircraft batteries. We also offer a combination of start and continuous power in one unit for the Piper PA-31-500 Chieftain aircrafts in our TC3000 range.

View all recommended ground power equipment, tools and Tugs for the Piper PA-31-500 Chieftain aircrafts below.