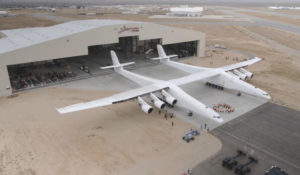 Earlier in 2019, the world’s largest aircraft (as I write) took to the sky for the very first time when it traveled from the Mojave Air and Space Port in Mojave, California.

Incredibly, the airplane has a greater wingspan than an American football field and it’s purpose is purely focused on launching rockets from the air, so don’t get too excited about flying on it yourself any time in the future!

Stratolaunch, the private launch company founded by the late billionaire Paul Allen, were behind the development of the plane and said, in a joint statement with Paul’s sister – Jody Allen –  chair of Vulcan Inc. and trustee of the Paul G. Allen Trust; “The aircraft is a remarkable engineering achievement, and we congratulate everyone involved.”

Although the maiden journey had not been officially announced beforehand, eagle-eyed photographers spotted the plane take to the sky, although it would be quite difficult to miss something larger than an American football field flying through the air.

However, in early October 2019, Stratolaunch announced that the were under new owners after , Vulcan Inc. choose to sell up.

The Stratolaunch Plane by Numbers: