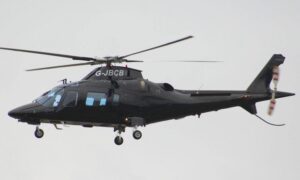 The AW109, originally designated A109, is a lightweight, twin-engine, multi-purpose helicopter, produced by AgustaWestland, now as Leonardo. The A109 was initially designed in the late 1960s, however it was intended to be a single-engine commercial helicopter. Subsequently, due to high demands for a twin-engine helicopter the designs were re-developed, with twin Allison 250-C14 powerplants. The A109 was introduced in 1976, and became a significant succes accross several utility roles. These include militray tasks, as well as light transport, medevac and search-and-rescue purposes. The A109 was the first all-Italian helicopter to be mass-produced, with productions ongoing to this day. A later variant was the A109C, with an eight-seat configuration for civilian use, and powered by Allison Model 250-C20R-1 engines.

Red Box is pleased to offer a great range of ground power and support equipment for this aircraft, including tugs, ground power units, start power units, aviation tools, and more, which are perfectly suited to the requirements of the Leonardo A109C aircraft.

This includes the popular RBI9400T mechanic hand trolley case complete with 161 BAHCO tools, the RBFLT25 electric tug, the RBPS50 continuous power unit, which is ideal for diagnostic work, pre-flight checks or for continuous powering of equipment during operations, without draining the onboard aircraft batteries and the RB50A for starting the aircraft, helping to avoid hot starts. We also offer a combination of start and continuous power in one unit for the Leonardo A109C aircraft in our TC3000 range.

View all recommended ground power equipment, tools and Tugs for the Leonardo A109C aircraft below.