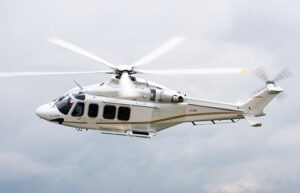 The AW139 is a medium-sized twin-engined helicopter, manufactured by AgustaWestland, which is now part of Leonardo. The AW139 is a multi-role, medium lift utility aircraft, which is broadly adapted to several different roles, such as passenger transport, emergency responder for law enforcement, ambulance or fire fighting operations, as well as search and rescue or maritime patrol tasks, becoming the most influential model of AgustaWestland over the years. The AW139 is powered by FADEC-controlled Pratt & Whitney PT6C-67C turboshaft engines, which allows for easy adjustments of the engine, and can automatically operate with one engine should there be a single-engine failure. This made the aircrafts more attractive in the target market due to its increased reliability, pilot convenience and patient/passenger comfort.

Red Box is pleased to offer a great range of ground power and support equipment for this aircraft, including tugs, ground power units, start power units, aviation tools, and more, which are perfectly suited to the requirements of the Leonardo AW139 aircraft.

This includes the popular RBI9400T mechanic hand trolley case complete with 161 BAHCO tools, the 717 tug, the RBSC100 continuous power unit, which is ideal for diagnostic work, pre-flight checks or for continuous powering of equipment during operations, without draining the onboard aircraft batteries and the RB75A for starting the aircraft, helping to avoid hot starts. We also offer a combination of start and continuous power in one unit for the Leonardo AW139 aircraft in our TC3000 range.

View all recommended ground power equipment, tools and Tugs for the Leonardo AW139 aircraft below.