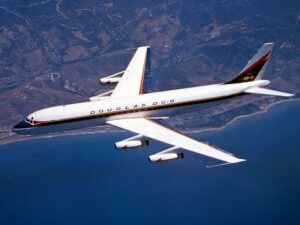 The Douglas DC-8 is a narrow-body airliner built by Douglas Aircraft Company, introduced in 1958. The project for this jetliner was announced by Douglas after losing a previous competition to the Boeing KC-135 in 1955. The DC-8 was directly derived from the aircraft proposed for the competition, gaining popularity at a rapid pace once deliveries began. The DC-8 Series 60 was introduced later, with the first model in the line, the DC-8 Series 61 going through a number of modifications. The model was designed for higher capacity, however sacrificing the range of the DC-8. This was later rectified in the further developments in the Series 60.

Red Box is pleased to offer a great range of ground power equipment for this aircraft, including tugs, ground power units, start power units, aviation tools, and more, which are perfectly suited to the requirements of Douglas DC-8 Series 60 aircraft.

View all recommended ground power equipment, tools and Tugs for the Douglas DC-8 Series 60 aircraft below.