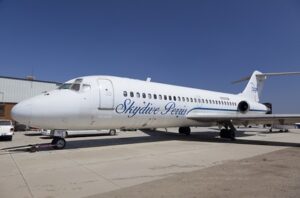 The McDonnell Douglas DC-9 is a single-aisle airliner designed and produced by the Douglas Aircraft Company. The design was proposed as a means to produce a smaller variant similar to the DC-8, which was much greater in size and capacity. The initial design encorporated two rear-mounted Pratt & Whitney JT8D turbofans under the T-tail. This had also allowed for a cleaner wing design, and airstairs built-in to the fuselage. Scandinavian Airlines had expressed a requirement for a similar aircraft with improved short-field performance, prompting DOuglas to create a the new Series 20 aircrafts. Greater performance was achieved by utilising re-envisaged wings and more powerful Pratt & Whitney JT8D-11 engines, in the DC-9-21 and variants to follow.

Red Box is pleased to offer a great range of ground power equipment for this aircraft, including tugs, ground power units, start power units, aviation tools, and more, which are perfectly suited to the requirements of McDonnell Douglas DC-9 Series 20 aircraft.