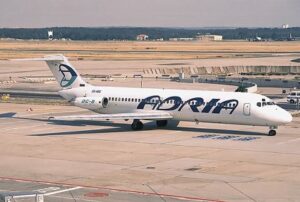 The McDonnell Douglas DC-9 is a single-aisle airliner designed and produced by the Douglas Aircraft Company. The design was proposed as a means to produce a smaller variant similar to the DC-8, which was much greater in size and capacity. The initial design encorporated two rear-mounted Pratt & Whitney JT8D turbofans under the T-tail. This had also allowed for a cleaner wing design, and airstairs built-in to the fuselage. In the late 1960s Douglas introduced the Series 30 with the model DC-9-31, for a competition. This was successfully submitted, and purchased by Eastern Airlines early 1967, thanks to its improved performance via the stretched fuselage and wings. The DC-9-33 was created as a passenger/all-cargo variant with enhanced MTOW and avionics.

View all recommended ground power equipment, tools and Tugs for the McDonnell Douglas DC-9 aircraft below.