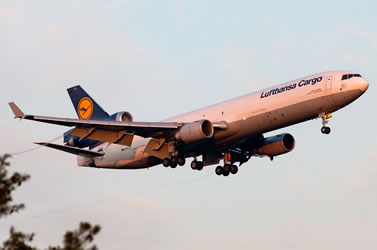 The McDonnell Douglas MD-11 is a wide-body airliner manufactured by McDonnell Douglas and later taken over by Boeing. The project to create this large airliner came to fruition after design for the DC-10 were complete, at the end of 1986. The design retained the trijet configuration demonstrated in the DC-10, however the fuselage was significantly wider and longer in the MD-11. The use of a glass cockpit allowed for the aircraft to be operated by a crew of two, eliminating the need for a flight engineer on board. The DM-11 went to production, initially under McDonnell and Douglas, then Boeing when the companies merged in 1997.

Red Box is pleased to offer a great range of ground power equipment for this aircraft, including tugs, ground power units, start power units, aviation tools, and more, which are perfectly suited to the requirements of McDonnell Douglas MD-11 aircraft.

View all recommended ground power equipment, tools and Tugs for the McDonnell Douglas MD-11 aircraft below.