Recently, we posted some interesting aviation facts which you may or may not have been aware of. We’re following up again on this series of posts but this time we’re going to focus on commercial aircraft safety. A typical passenger may not notice all of the features and procedures put in place to maintain cabin safety as this is the cabin crew’s primary concern; ensuring that we all remain safe during our travels and to be available in the case of an emergency. However, more frequent fliers may begin to notice some processes or things within the cabin and begin to wonder what functions they have. Although we certainly don’t hope any issues arise when you’re jet setting, take a look at these facts as you never know, they may come in handy! 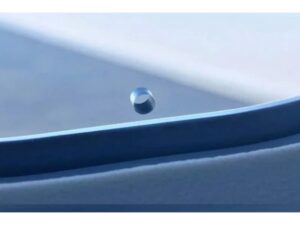 The little hole in your window is meant to be there! –

If you’ve ever sat in a window seat, you’ll likely have noticed the little hole towards the base of the window. This is known as a bleed hole and these act as release valves within the cabin. The air pressure within the cabin during flight is greater than the pressure outside of the aircraft. The windows are triple-glazed because of this and as the outer cabin-side window bears most of the load, this breather hole helps to disperse the pressure further so it can be contained.

Have a little triangle above your window? Here’s why – 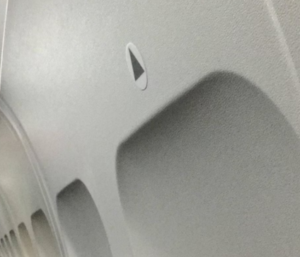 You may have noticed on your travels a small black triangle above your window. This acts as a reference point for the flight or cabin crew to observe for any issues with the wings or wing flaps such as icing or potential malfunctions.

In case of emergency like a passenger collapsing in the toilets or for any other issue (like a fire breaking out) where a crew member needs to access the lavatory, the door can be opened from the outside even though it may be locked from the inside. This can be achieved by There is a small plaque with a switch button underneath that allows the crew to release the lock and gain entry. So as a final warning, joining the mile-high club might seem like a fun idea at the time, you won’t get the kind of privacy you might expect!

You should hopefully know the rules by now. In the act of an emergency where the aircraft begins to de-pressurise, the oxygen masks pop out from above, you make sure to put your mask on first by pulling down on the mask to extend the tube, covering your nose and mouth with the yellow cup. However, pulling down on the tube isn’t just to make it easier for getting it on your face, it starts a chemical reaction. Oxygen tanks are a no-go on aircraft as they’re far too heavy and take up a lot of space, therefore the panel above your head contains a chemical oxygen generator. It’s a small canister that holds sodium chlorate, barium peroxide and potassium perchlorate and when all three are combined via a chemical reaction, they begin to rapidly produce oxygen.

It might not feel like sitting in them when you’re on a long-haul flight but there is a tremendous amount of research put into commercial aircraft seats, even in economy. All aircraft seats are put through rigorous testing to ensure that they comply with the durability and head-impact protection guidelines. For example, seats are built to be able to withstand roughly 16 times the force of gravity! They are also fire-resistant and the seat cushions have some buoyancy capabilities so they can be helpful to hold on to if you’re having to make an unexpected land on water.

Only one engine in operation? No problem! –

Jet engines are so powerful that if one cuts out without warning during flight, the aircraft can still function fine. The plane can also continue to fly even if malfunctions occur in both engines. Engines provide thrust, one of the four forces of flight, along with lift, drag and weight. And while thrust will push a plane up or forward, it’s the wings that will keep the plane in the air. Engines are only part of the equation.

In 2001, Air Transat Flight 236, carrying 293 passengers and 13 crew, lost power in both its engines over the Atlantic Ocean and managed to glide without any power for a whopping 19 minutes, covering some 75 miles, until landing safely at Lajes Air Base. There were no casualties. This incident has gone down in aviation history as the furthest flown by a passenger jet with no engine power.

So, there you have it, some of the most unusual commercial aircraft safety features you may not have been previously aware of.

If you’d like to find out more about our ground support equipment that we offer, contact our experienced Sales Team on either +1 (770) 962-6188 or via email at info@pricelessaviation.com who will be able to assist further.